Risk is an essential ingredient within entrepreneurship and you cannot avoid risk in business. These are facts. Consequently, many people will simply never become entrepreneurs. That is also a fact. 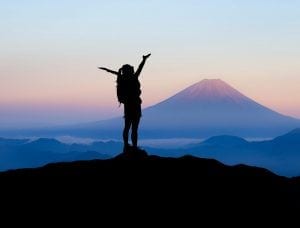 When launching a new business, it is vital to weigh up the risks involved and consider them in relation to the rewards to be gained by taking the risk. It is a pros and cons type scenario and how it balances out can often be dependent on one’s mindset.

Experts say risk-taking behaviour is rooted in our personalities. Daniel Kahnemann has stated: “For most people, the fear of losing $100 is more intense than the hope of gaining $150.” The risk-takers tend to see the blue sky, not the drain through which money could be pouring, if things go wrong.

Psychology expert Tony Higgins has identified what he calls a ‘prevention focus’. This is described as being a robust aversion to being wide-eyed, making mistakes and taking chances. It is a ‘better the devil you know’ attitude towards both life and risk. ‘Goals’ for those with a ‘prevention focus’ are centred on maintaining the status quo and not venturing beyond the comfort zone.

Entrepreneurs do not fit this profile and are likely to be found within a pool of ‘promotion-focused’ people. These individuals see goals completely differently. To them, goals are a means to progress, achieve and be better off.

‘Prevention focused’ individuals do things in a slow, deliberate way and even drive differently from promotion focused motorists, according to researchers at the University of Groningen in the Netherlands. They don’t speed and they also leave larger gaps between themselves and the car in front than their ‘promotion focused’ counterparts. However, if a prevention focused person finds their status quo threatened, they become just as likely, or even more likely, to take risks than those who are natural risk-takers.

Which camp we fall into may all be down to our genes, according to Kellogg Management Professor, Camelia M Kuhnen. She says those with the long version of DRD4 – which regulates hormone levels in the reward centre of our brain – are 25% more likely to take on financial risk in an investment portfolio.

Looking deeper into this, the Aspray Franchise, which offers entrepreneurial opportunities to franchisees wishing to start their own loss assessing and property damage claims management businesses, sees clear correlations between the risk-taking profiles described by psychologists and its current franchisees. For instance, therapist Peter Shallard profiles risk-takers as conscientious, meticulous and careful people who like to be ‘finishers’ of tasks. He identifies Forces personnel as being in this category. Interestingly, if we look at some of our most successful Aspray franchisees, they too are ‘finishers’ and some also had a career in the British Army, RAF, Royal Navy or Police Force.

Those people who manage to ride the waves that come with risk in business tend to do very well, as long as they keep arrogance and ego in check and don’t become over-confident. The rewards that are the flipside of risk can be financial – earning a much higher salary and making tidy profits – or things that give you a buzz, such as taking on a first client, opening your office door for the first time, being in control and getting great feedback from clients. There are many more. Some get such a buzz that they build one business and then start another. These are the true serial entrepreneurs.

On the risk side of the fence, there is always the chance of loss, a failure to achieve outcomes and the stigma that comes with failure. That’s why taking a calculated risk, rather than a full-blown one, can allow some people to make the transition between being prevention focused and promotion focused.

Franchising is one such calculated risk. It is difficult to test a new idea in a market without actually trading and very easy to be over-confident and almost deluded about the chances of success. If you start a business as a franchisee, however, the concept that you buy into has already been road-tested and it has been shown to work, within a set model that you can follow, if you want it to work for you too.

Our Aspray franchise model is a robust one that has the potential to allow a franchisee to make the rewards outweigh the risk they take when buying a franchise territory. KRIs (Key Risk Indicators) have already been considered when building the model and Aspray knows how such risks can be overcome. This enables us to advise our franchisees well and give them the formula for probable success.

However, as there is always a risk in business, those franchisees who do not follow the advice and plan provided are making things riskier for themselves. Whilst our franchise model offers a franchisee the path towards reward, it requires hard work, dedication to building a client base, being comfortable with networking and phone-based client sales, and having the capacity, given that Aspray supports property insurance policyholders who have suffered some form of loss, to build trust and show empathy.

It is very easy to underestimate the degree of effort required to achieve success and frustratingly simple for fear to take you over, paralyse you and create obstacles that can prevent objectives from being achieved. However, focusing on the rewards, and being mindful of such risks, should help both promotion focused individuals, and those prevention focused people needing to positively alter a status quo that has become destabilised, to flourish.

For more information on the Aspray Franchise opportunity, please visit www.asprayfranchise.co.uk or call 0800 077 6705.