Written by Pip Wilkins, Head of Operations at the BFA, British franchise association.

As the popularity of franchising has grown substantially in the UK, it’s more important than ever for potential franchisees to make sure that a franchisor is operating ethically and not just out to sell franchises before disappearing. That’s where the British Franchise Association (bfa) can help.

The bfa was formed in 1977 to differentiate good franchising and business practices from less scrupulous ones. With no previous standards structure in the UK, the bfa was set up as the self-regulating trade association and accredited a company’s suitability for membership on strict criteria.

This standards-based approach forms the cornerstone of the association, and ethical franchising, to this day: criteria to become a franchisor member broadly relate to the structure of the business; the franchisor/franchisee contractual relationship and support; the testing of the system; and its success as a franchise.

All members of the bfa have undergone this process. Those companies have chosen, voluntarily, to submit their business model to serious levels of scrutiny, and that should show franchisees the pride they take in supporting their network, and the clarity with which they approach their prospects. Not all applicants can, or do, pass bfa accreditation – each year companies are turned down for membership.

It is important to remember that membership is not a guarantee of success; your own attributes, dedication and tenacity will be instrumental in determining that. What bfa membership demonstrates is a commitment to the principles of ethical franchising and best practice – something that every prospective franchisee should demand of their franchisor.

There are four key elements of an ethical franchise, which all bfa franchisor members adhere to:

With the franchise model underpinned by the synergy between franchisor and franchisee, operating ethically of course also makes good commercial sense. The ability of franchisors to attract investors into their systems depends on their reputation, and the reputation of franchising in general. 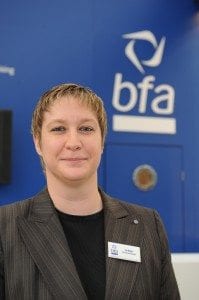 One last point to bear in mind – franchisees of bfa members can also join the Association, receiving business benefits and cost savings, also enjoying the chance to join its board of directors.

Pip Wilkins is Head of Operations at the bfa. Highly regarded and well-known throughout UK franchising, she regularly hosts national events and seminars as well as contributing articles to national, business and franchise press. Pip has held a number of management positions during a 15-year career with the bfa.

If you are interested in learning more about the Aspray franchise, leave your details and our sales manager will get back to you.