Our award-winning team at Aspray HQ is handling one aspect of our franchisee recruitment with military precision, having already seen how individuals from disciplined backgrounds can become forces of nature as property claims managers and loss assessors.

As a franchisor in the property claims management sector, handling property claims on behalf of thousands of property insurance policyholders nationwide, we are always looking for individuals who have first-class project management skills, backed by super man-management capabilities.

These skills are often to be found in those who have served in the armed forces, fire and rescue services, or police force, if their role whilst serving the country and the community has involved leadership and project planning. 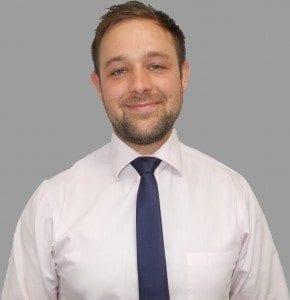 One such franchisee is James Coulman, who left his role as a Forces Engineer and Officer in the RAF in November 2015, after six years’ service and is now and Aspray franchisee.

James was not particularly looking to purchase a franchise, but was focused on trying to find an opportunity to use not just his BA and Masters’ Degree in Engineering and his project and man-management skills, but also his knowledge of property repairs and refurbishments, gained whilst transforming various types of property.

When James became aware of the Aspray franchise opportunity, he instantly perceived how the Aspray model suited his skill-set and his ambitions. He carried out some online research and recognised that Aspray was a reputable and professional company with strong brand values and an unswerving commitment to customer service excellence.

He investigated the opportunity further, at a 121 meeting at head office, and completed the research project, to demonstrate his suitability for the role and his commitment to Aspray’s ethos of ‘treating customers fairly.’

James realised that a salaried career was not for him and that a desire to run his own business could not be ignored.  Being accepted by Aspray, and then buying a territory achieved that goal.  From there, whilst there has been ongoing support from Aspray HQ, he saw that it was his responsibility to work hard, to find and recruit customers and build up his business and reputation.

When asked what is required of those wishing to succeed as an Aspray franchisee, James says, “Being a loss assessor is all about building the policyholder’s trust and establishing credibility, as they rely on you to be their voice in negotiations with their insurer’s representative. It is down to you, as their instructed loss assessor, to arrange a fair settlement and scope out a schedule of works, so that their repairs can be carried out competently and to a high standard.

“At the same time, great negotiation skills are invaluable when putting the policyholder’s case to the insurer’s loss adjuster.  To achieve all of these things within each and every property claim handled, Aspray franchisees need good communication skills, confidence in their ability to influence others, determination and resilience.

“Those who have served in the forces often have some of these qualities, but leadership and project management are skills that are equally important, if you wish to delight the customer and handle their claim seamlessly, from the point of being instructed by the client, right through to the completion of the works’ schedule and project sign-off.  Planning and overseeing the project effectively is hugely important and micro-managing Aspray’s vetted contractors is also key.”

After nearly two years as an Aspray franchisee, James believes he has marshalled all of his skills effectively, often dealing with the aftermath of water damage in prestigious private apartments in his territory, but also having to adapt and think quickly, to suit each individual scenario, whether that is a property claim following malicious damage to an office block, or fire damage at a bar or restaurant.

“I have helped policyholders through some of the most challenging times of their lives,” adds James, “and what is essential, in what can be very stressful situations, is a never-give-up attitude, no matter what the obstacles appear to be.”

Having built up his business in Yorkshire, James has now encouraged his brother, Michael Coulman, to take over a neighbouring territory.  This follows the retirement of franchisee – Craig Conley –  and the resale of that franchise territory.

Both Coulmans will now be putting properties back to together again, following property damage incidents, giving insured property owners in and around their territory first-class loss assessing services on their doorstep.

If you have had career experience in a disciplined environment like the forces, or have the type of skills described in this article, it may be worthwhile exploring the Aspray franchisee opportunity, by calling 0800 077 6705 or visiting www.asprayfranchise.co.uk